N°81 : Partnerships between farmers and businesses

The Covid-19 pandemic has revealed the structural weaknesses of the global food system and has been an aggravating factor in existing food and nutritional crises. Roughly 690 million people were already suffering from hunger in 2019, and current projections indicate that the pandemic will push as many as 132 million more people into the same situation. Everyone agrees that food systems are unsustainable. Industrial farming practices have a huge environmental cost and put the food security of future generations at risk. Besides farming, food systems face many other challenges, both global and local: economic inequality, gender inequality, climate change and biodiversity loss, migrations, conflicts, and the list goes on.

Food systems were therefore the focus of the most recent United Nations summit in September 2021. The event brought together people from the fields of science, business, politics and health, as well as academics, farmers, members of indigenous communities, youth organisations, consumer groups and environmental activists. But there were a number of controversies regarding the organisation of this international event, particularly with regard to its governance, which did not include certain key actors, such as farmers’ organisations. Derided by a number of civil-society organisations as a farce, the Summit appears to have been a missed opportunity for the international community to tackle urgent global issues. Criticism was fuelled by the preponderant role given to private agribusiness entities and large companies in the agrifood sector.

But the “private sector” – in West Africa, as elsewhere – encompasses a wide range of companies, not just foreign multinationals. The discussion was suited to the abovementioned context: farmers and businesses (both upstream and downstream) all have a role to play in transforming food systems. They help structure value chains and develop sectors, each at their own level and according to their own area of expertise, size, influence and resources. They are drivers of development in their respective local areas, countries and regions.

How do they team up with one another? What are the challenges and opportunities for farmers’ organisations and their members when it comes to partnering with businesses? And conversely, what challenges do agrifood companies face? What are the best support mechanisms for promoting family farms and sustainability? This jointly produced issue of Grain de Sel features shared experiences and real examples of partnerships. They illustrate issues such as trust-building, the importance of strengthening FOs, and the challenges posed by power asymmetry in negotiations between actors.

We are looking forward your reactions and comments ! Write to us at this address :  inter-reseaux@inter-reseaux.org

This issue is part of a thematic cycle lounched by Inter-réseaux in 2017 to spark discussion and debate on private-sector involvement in African agriculture, with a particular focus on agricultural policies, funding and the structuring of value chains. Read more about it

The English translation of the publication was made possible with support of the International Fund for Agricultural Development (IFAD).
The opinions expressed in this publication are those of the authors and do not necessarily represent those of IFAD.

Read on-line with the interactive version of the magazine

This issue is also available in French. 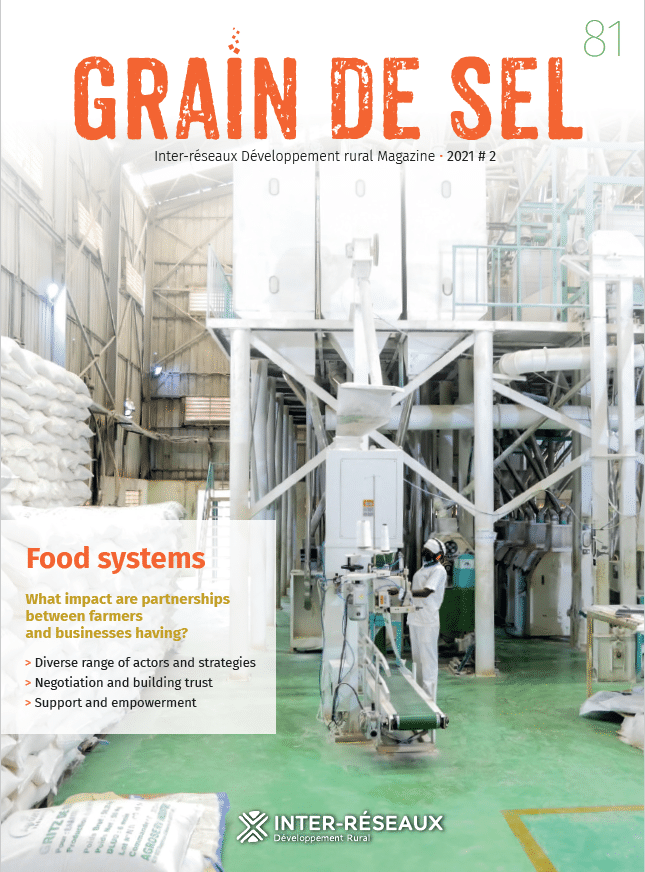