At the WTO Bali Ministerial Conference, governments decided to shield public stockholding programmes from challenge until a “permanent” solution was worked out. This paper, by Raul Montemayor, explores how various scenarios could affect the measurement of domestic support under WTO rules. The simulations suggest that a strict application of current rules could lead most of the developing countries examined in the study to breach current ceilings, but that more commodities in more countries would fall within existing limits if this support were assessed and calculated differently.

Foreword
The relationship between international rules on trade and the achievement of national and global objectives in the area of food security has long been a subject of contention at the WTO. Over the years, this debate has matured considerably, moving from a rather simplistic discussion of whether market opening is intrinsically good or bad for food security, towards a much more nuanced appreciation of the complex implications that various trade policies and rules may have for different types of food producers and consumers, in different places and at different times.

ICTSD has sought to help foster this more sophisticated discussion by sharing impartial, timely and policy-relevant analysis with trade policy-makers and negotiators, and by fostering dialogue between different policy actors at both the national and international level.

While food security is mentioned in the preamble to the WTO Agreement on Agriculture, as well as in a number of other places in the same agreement, talks in the early years of the Doha Round and immediately beforehand focused primarily on the issue of how trade-distorting subsidies in certain developed countries might undermine food security in poorer parts of the world, and on the question of the extent to which developing countries should be granted exceptions from trade liberalisation commitments on food security and related grounds. More recently, in the wake of successive food price spikes and the threat of further climate-induced disruptions to global markets in years ahead, the issue of food security has once again shot to the top of the agenda of leaders around the world. The FAO and other international agencies have nonetheless underscored the fact that – despite progress – a substantial proportion of the world’s population has continued to lack adequate food and nutrition, both before the recent price spikes and since then.

WTO members have struggled to find ways in which to ensure that the rules of the multilateral trading system on agriculture respond effectively to the new challenges of today’s world, and to those of the future. The difficulties in doing so are arguably compounded by the continued inability of governments to conclude the long-running Doha Round of trade talks – in which agriculture is a central component. At the same time, there is a growing awareness among many trade policy actors that the changing market environment requires new policy responses and new international rules, in areas ranging from biofuels and agricultural export restrictions to rules on ‘green box’ support and the reporting and monitoring of farm subsidy payments. Arguably, the rise of food stockholding schemes to the top of the trade policy agenda in the run-up to the Bali ministerial conference can be seen as symptomatic of the inability of WTO members to agree on equitable and effective solutions for updating farm trade rules in ways that would address new trends in markets and policy design.

During 2013, debate therefore focused on the extent to which existing rules on public stockholding for food security purposes were adequate for developing countries to achieve public policy objectives in this area. The G-33 coalition, as part of an initiative that was led by India, called for current rules to be relaxed in order to take account of price inflation that had occurred since thresholds on trade-distorting support were agreed some two decades ago. Others – including some developing countries – expressed concern that resulting trade distortions could undermine producers in other countries, and potentially also affect food security as a consequence.

Trade ministers agreed an interim solution to the problem in Bali, but also committed to begin discussions on a ‘permanent solution’ once the ministerial conference was over. This paper, by Raul Montemayor, seeks to contribute to this process by providing policy-makers, negotiators and other stakeholders with an impartial, evidence-based analysis of policy options for such a solution, by examining the implications of various scenarios. As such, we believe it represents a useful and important contribution to the broader debate over how trade rules and governance frameworks can best support food security goals at the international level. 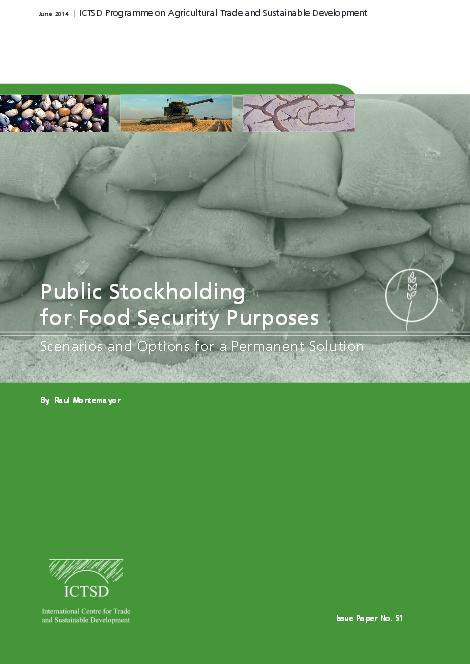 'The unusual suspect? The private sector in knowledge partnerships for agricultural and rural development'

'The unusual suspect? The private sector in knowledge partnerships for agricultural and rural development'