Trends in foreign direct investment in the agricultural sector of developing and transition countries : a review

In the last years, investment in the agricultural sector in developing countries has been neglected and the share of public expenditures as well as Official Development Assistance (ODA) in agriculture has declined. The rising commodity prices have served as a wake-up call to support agricultural development and ensure food security and poverty reduction.
FAO has estimated that investment of USD 83 billion per annum is required in developing countries’ agriculture to meet the food demand in 2050. This estimate does not include the investment in public good provision such as infrastructure, storage facilities, market development or R&D. Government spending and involvement (e.g. through ensuring agricultural institutions, extension services, education, sanitation) in agriculture and provision of public goods are suggested to be most effective in increasing productivity, enabling capital formation, providing incentives and opportunities for farmers to increase their private investment, and strengthen the sector and smallholder farmers in order take advantage of the prospective Foreign Direct Investment (FDI) in the sector.
FDI in agriculture of developing countries was only 1% of total world FDI inflows, but has increased in the recent years, in particular in Asia and Oceania, Latin America and the Caribbean and South-East Europe and the Commonwealth of Independent States.
However, developing countries receive (i) less FDI in food processing than developed countries, implying that a large share of higher value added activities takes place in developed countries, and (ii) more FDI in cash crops, e.g. renewable energy sector, than staple crops. Large-scale cash crops production may drive small-scale farmers out of production, increase farmer’s production risks, and negatively impact food security.
In many developing countries, involvement of Transnational Corporations (TNCs) increased form the 1980s onward; food processing advanced to an increasingly important manufacturing sector. Almost all headquarters of the top 25 TNCs in the agri-food value chain segment of input supply, food and beverages and retail are located in developed countries, whereas about half of the top 25 TNCs in the agricultural production segment are headquartered in developing countries. In particular, only few TNCs have considerable market share in the supply segment.
In recent years, institutional investors, e.g. hedge funds, private equity groups, pension funds, sovereign wealth funds have developed interest to invest in agriculture to diversify the portfolio or being part of the national food security strategies. In particular, large-scale land acquisitions have come under scrutiny as they entail considerable risks, e.g. denial of right to food and access to resources, loss of livelihood, food insecurity, and environmental damage. In order to comply with the human rights obligations, host governments may wish to support alternative, inclusive business models such as contract farming or joint ventures. Regional or international frameworks such as FAO’s voluntary guidelines (VG) on the governance of tenure can help to support this aim.
The success and development impact of inclusive business models is contingent on context, policies and whether TNCs engage in it as fair and genuine economic activity. Thus, TNCs should ensure farmers’ involvement in establishing the contract, provide fair and transparent pricing mechanisms, support sustainable agro-ecological production forms, take responsibility for production risk, and refrain from abusing the unequal bargaining position through depressing wages or prices. Host governments may also support farmers by strengthening their negotiation power and providing information services. The latter may be important as literature identifies a gap between companies’ rhetoric and actual practice with respect to the implementation of voluntary, unilateral measures and corporate social responsibility initiatives.
Several benefits can be potentially gained from FDI and TNCs involvement in the agricultural sector. These include tax revenues, infrastructure development, provision of high quality inputs and access to credit, development of skills such as record keeping, and provision of technical advice for contract farmers, and R&D developments for the entire sector. But these might not automatically materialize and could instead lead to low level of net employment, lock-in in a specific segment of the value chain, marginalization of farmers, environmental degradation due to mono-cropping and high irrigation water amounts, farmers’ dependencies on contracts and input supply, unsuitable technology transfers. Literature concludes that benefits may materialize when host countries align the prospective investment with their national agricultural development strategy. The establishment of an integrated policy approach, which comprises policies in areas of infrastructure, R&D, fiscal reforms to benefit from prospective tax revenues may be desirable. FDI may have the most positive impact when the sector is fit to take advantage of the spillovers and the local community and small-holder farmers are strengthened and supported by the availability of public goods, education and training, access to credit markets, secure tenure rights and thus bargaining power.
Overall, FDI may contribute to bridge the investment gap and have development impacts, but government involvement to guide the investment and strengthen the smallholder farmers in the sector remains crucial. Considering the heterogeneity of the local communities, a multi-stakeholder mechanism with open dialogue about the role and merits of TNC might be promising. 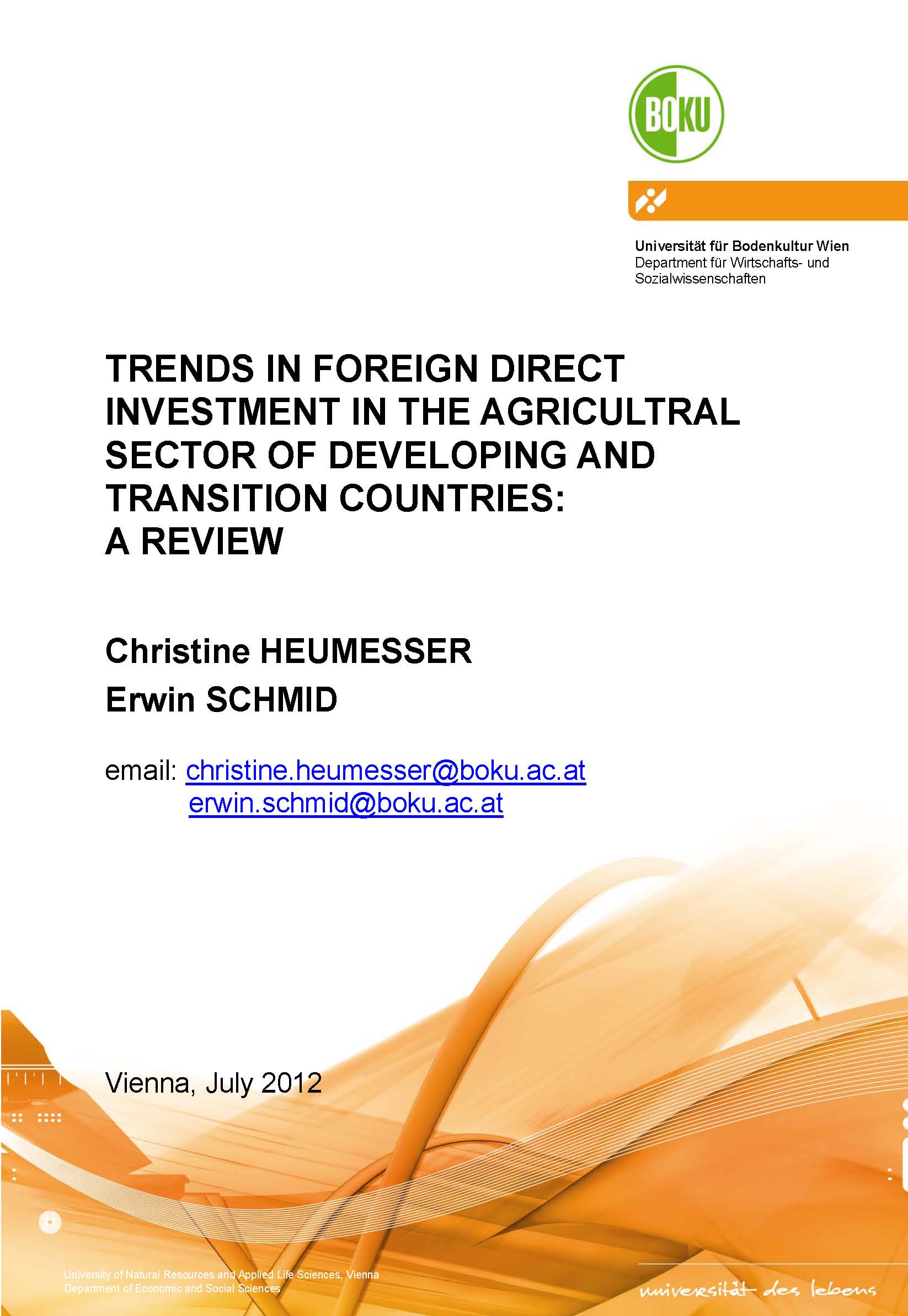 Role of Farmers’ Organizations in Agricultural Transformation in Africa

Role of Farmers’ Organizations in Agricultural Transformation in Africa